You’d never catch Take That, Boyzone or One Direction hanging out in the backstage area of The Key Club, Leeds’ murkiest punk and metal bar, but Neverland Clan, the self-proclaimed World’s Gnarliest Boyband, fit right in. On the surface, Neverland Clan are another young hip-hop collective bubbling under in a thriving London scene. However, a short listen to their burgeoning Soundcloud feed, (‘Fuck Your Club’ from last year’s ‘PlayStation EP’ a case in point) and it becomes apparent that the non-conformist collective aren’t chasing anyone else’s wave.

Growing up in Catford, South East London, the trio formed when Ryan and Omelet, who’d been causing a stir with a clothing label ran out of a bedroom, met Daniel after hand delivering a hand-painted jacket for him to wear at an early show. They bonded as much over their individual quirks as they did their mutual interests. Omelet spends his time listening to Slipknot and forming rough-cut symphonies from distorted jazz samples and dissonant piano loops. Daniel OG, deep-voiced and wide-set like a Hackney Biggie Smalls, cuts through atmospheric darkness with wit, dexterity and tongue-in-cheek honesty. And the whole concoction forms under the watchful eye of Ryan, the group’s orchestrator and evil genius in the making. “From the very start we came in trying to merge our collective influences,” explains Ryan. “All we want is to make things, create something that us, and people like us can relate to.” 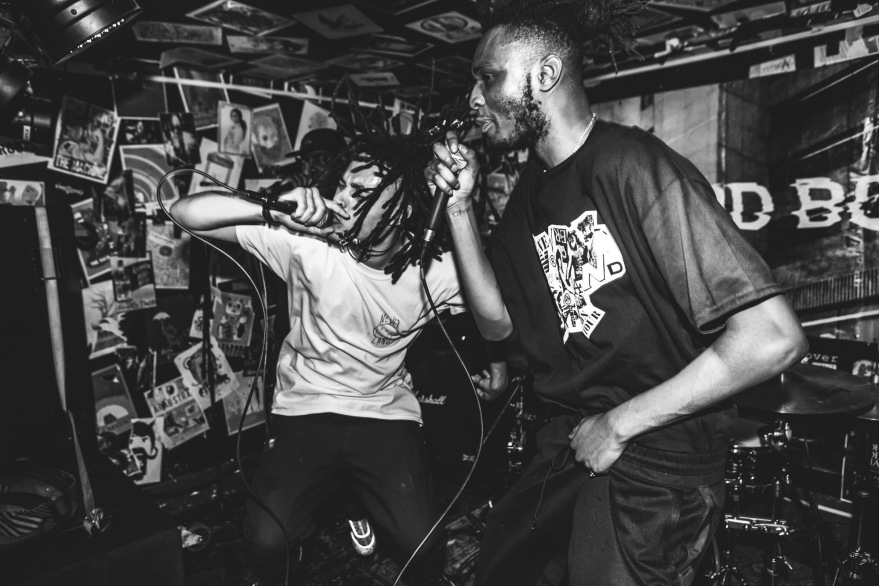 Balancing their music, with forays into graphics, photography and fashion have won the attention of Skepta, Virgil Abloh and Boiler Room (the latter had them host their own night with 808INK and Siobhan Bell this Summer), the most alluring thing about these guys is their promise. They’re setting a precedent for their fellow young creatives, inspiring action simply by dedicating their early 20’s to the pursuit of something wholly new, and with DIY blood coursing through their veins; something wholly theirs.

Sunk into the battered greenroom sofas in their vandalised clothes, Ryan Hawaii, Daniel OG and producer Omelet are contemplating the final show of their first ever UK tour. “We’re not even in our prime yet,” says Omelet. “If we keep going, keep doing shit for ourselves, by the time we’re 30 we’ll be among the best in the world.” It’s a big statement to make at such an early stage in their careers, but it’s more than simply overconfidence. It’s complete faith in the power of their own potential. “We want people to witness our development and growth” says Ryan, who minutes ago was swinging from a drainpipe during soundcheck, with a frank and insightful stare. Before Daniel chimes in, “It makes the people feel part of it. Part of the Clan” finishing off a share bag of Sweet Chilli Sensations.

Neverland Clan as a whole is a musical and creative entity that, in their own peculiar way, has the potential to energise and motivate scores of young people. Earlier this year they managed to convert a modest pop-up store in Bethnal Green to a takeover of Selfridges’ Off-White section in just a few Tweets, causing Virgil Abloh himself to invite Ryan back to the store six weeks later to talk about guerrilla marketing at a fashion seminar. With solo projects in the offing for Daniel and Omelet, the Clan promise that 2017 will see even more of a creative uprising than the whirlwind twelve months we’ve just had. By all accounts, the gnarliest things are still to come for these three – a boyband like none you’ve ever seen before.